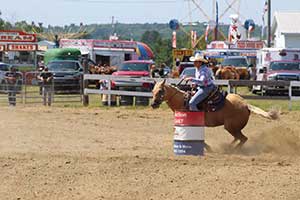 Pittston Fair ©Emily SparrowPittston is located about seven miles south of Maine’s capital along the eastern shore of the Kennebec River just across from the city of Gardiner. Pittston is a small rural town with the beauty of the historic Kennebec River as a backdrop along with easy access to all services the capital area has to offer.

Historically, Pittston specialized in boats, ice, and lumber and was a thriving river community. The historic Major Reuben Colburn House - a state historic site - and the Pittston Congregational Church are located in Pittston. Pittston is home to “Maine’s Friendliest Fair,” the Pittston Fair. The fair celebrates its 67th year of serving up fun, food, entertainment, and agricultural competition and education for all ages in 2019.